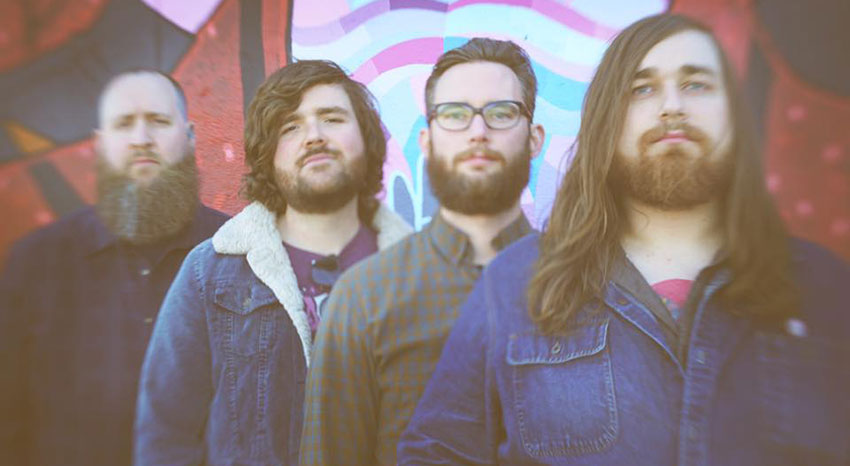 Ramble Beyond came out this spring, and it’s definitely worth listening to, it starts softly with a provocative glow that explodes into “Asleep in the Orchard”...

the opening track of this album, there is something very stimulating about their playful pace, how it swings effortlessly from a ferocious place into a soft one and that’s an addictive quality that gently elevates you throughout the album; there is something romantic about the way they play, a tenderness to their narrative, a sinuosity, also, that might easily be related to a mountainscape, their music is very visual, it’s almost natural to visualize glistening streams that dance about on their way down and sharp edges blurred by the passing clouds on their way up, such is the case of “A Graceless Shuffle” one of the most thrilling moments of the album, it feels as if you were defying a great inner mountain: the mud, the heat, the intensity of conquest. “The Lonesome Sound” shares its psychedelic palette of colours with the sunset, a colorful haze that expands beautifully into a storm, it’s not every day that you stumble into vocals like theirs or into a band that puts out material as honest as this, they are the music, therefore they meld into the landscapes they’ve built. “Kindled Green” has a dazzling way of returning to it’s start, of revisiting places we’ve discovered through the album, it’s a journey beyond the road that begins to fade with “In the Black Fir”, another thrilling highlight; with seductive glimpses of progressive, americana and stoner-rock, it expands as it merges these genres into their own whirling cloudscape, as the last beams of the sun escape into the sky.

-How did Bask first started out?

Scott: The early stages of BASK first came to be thanks to Matt Evans (of Old Flings and Just Die) introducing Ray Worth (guitar and vocals) and me, since he knew we were both looking to play heavier music. This was December of 2011. We started jamming, writing structures of songs,and tried out quite a few bassists and guitarists. Jesse Van Note joined the band on bass in the late summer of 2013, with Zeb Wright soon following with guitar and lead vocals. We played our first show in December of 2013 and have been pretty busy ever since.

-Please tell us where were you when you first released “American Hollow” and where are you know with “Ramble Beyond”?

Scott: American Hollow  was released in July of 2014 and Ramble Beyond was released in March of 2017. Since we've released our debut LP we've experienced and grown a lot as a band, from the typical craziness that is part of being on the road, to being lucky enough to tour Europe twice.

-What have you discovered along the journey of this brand new album?

Scott: We've discovered much during the creation, recording, and release of Ramble Beyond. We've learned how to play much tighter as a band and what we all need as individuals to feel creatively and personally satiated.

-What’s the story behind “A Graceless Shuffle” and “Kindled Green”?  Tell us a bit about the narrative you’ve built throughout the album.

Zeb: The first half of the record are all songs that tell stories from history.  A Graceless Shuffle, is about the 1904 Olympic marathon. Thomas Hicks ran the race consuming only raw eggs and rat poison (which gives the nervous system a jolt) instead of any water. The term “a graceless shuffle' describes him crossing the finish line. Look it up. It’s a wild story.  The second half of the record is more personal. Kindled Green is about materialism and destructive behavior, and the restorative value of nature.

-Your music paints before my eyes a glistening mountainscape, am I overreaching? What images lie behind your music?

Scott: I think that's a great description. We are all constantly inspired by the mountains and landscapes that surround our Asheville home. We love it here. Especially in summer, I try to make an effort to get outdoors a lot. It's peaceful, grounding, and my version of church.

The lyrics from Ramble Beyond paint many different scenes of the human spirit questioning and pushing one's self through self imposed and natural boundaries. I'll leave the rest of that to the listener to decipher.

-Your artwork has this dream-like quality to it, could you tell us more about it?

Scott: The artwork for Ramble Beyond was created by Adam Burke of Nightjar Illustration. If you dig a bit deeper into it, there are some lyrical themes buried within the art. We are so happy with the art- it is cosmic Appalachia at its finest. His artwork is profound and leaves me awestruck.

-Tell us more about “Asleep in the Orchard”.

Zeb: "Asleep in the Orchard" is about John Glenn going into space for the first time.  His struggles with leaving the planet and what it said about his faith and the creation of the planet.  It’s sort of half about how challenging personal growth can be.  The other half raises the question, if you see thousands of tiny glowing orbs flying through the vacuum of space swirling all around your ship like some astral being or maybe the very hand of god, is that any less beautiful than frozen urine ejected from the spacecraft?

-Is there a particular reason both of your albums are six tracks long?

Scott: Both albums being six tracks long was unintentional but we do try to be conscious to not drag our albums and live performances on too long, in hopes to leave people wanting more rather than wearing out our welcome.

-Could you tell us more about “In the Black Fir”?

Zeb: "In the Black Fir", was inspired by a week I spent in Leicester, North Carolina and a weekend I spent home in Millers Creek, North Carolina. It’s sort of an ode to Appalachia, returning to where you came from and going out and making your own life. It’s about reconnecting with the important parts of living and shedding things that are unnecessary or damaging.

-What has influenced and inspired you the most?

Scott: We are inspired by so many different things and it's not difficult to maintain that feeling here in Asheville, from the creative and progressive food, beer, and music scene, to the vistas surrounding our daily lives. The local music scene has kept me feeling really positive in the past year. I feel the experimental aspect of the scene has been bubbling over recently. I'm very inspired by my bud Thom Nguyen (of Nest Egg, Manas, House and Land) who has been performing these mind blowing solo percussion sets around town.

-What does the future hold for Bask?

Scott: The rest of this year is very exciting for us. August 19th we start a 4 week tour with Pallbearer and Kayo Dot. We are playing Hopscotch festival in Raleigh, NC, on September 7th, that we are stoked about. Then in October, we will be going back to Europe for a couple weeks. There is much to look forward to!

Ramble along for more music!