November comes to an end. The Ars Futura Festival was, without a doubt, one of the most outstanding events of the month.

Held at Mexico City, it transformed the Cineteca Nacional into a brand new place, into a restless canvas with it's stunning lineup: from Scott Kinsey, who took us for quite the ride with his latest production: "Near Life Experience" along with Gary Novak, Marco Rentería and Diego Franco, to the delirious As One, a remarkable duo formed by Iraida Noriega and Ken Bichel. The moon herself went out to have a close listen, they say our earthly satellite hasn't been this big since 1948, and she stood very close and attentive to the stage in spite of the changing breeze; when Hauschka came out to the stage, the clouds swarmed, the moon vanished and the audience awaited impatiently on the grass for him to prepare his piano. A dream-like scenario. 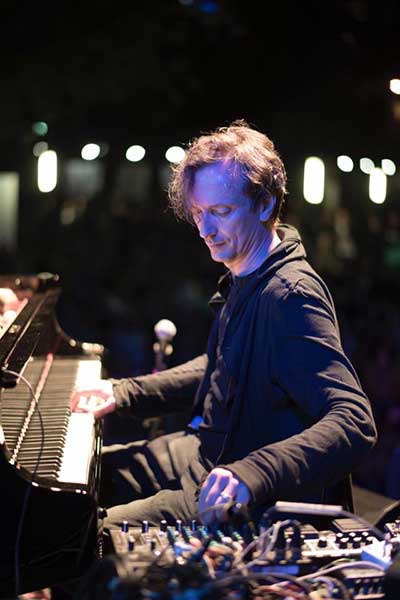 Hauschka’s music is a minimalistic delight, the flow of time in his music is almost palpable, familiar yet blurry at the same time, but how does Hauschka relate to time? "I think I'm losing time when I'm playing, but at the same time, I try to get back and focus on time again, it’s similar in a way to when you wake up from a dream and you just have to orientate yourself, but you feel at the same time: “it was very nice that I dreamt.” You want to get that back.  It's always dreaming, tension, dreaming, tension, going back and forth." An illusory yet natural flow of time, for Hauschka the extraordinary awaits in those little details we might be taking for granted. When asked about his source of inspiration: “Life” he answered without hesitating. "There was a girl standing in front of the stage, she was inviting me to her home to play piano...” Hauschka’s voice wasn’t very good after the concert, it had been a particularly cold night. “Yeah, but you only live once” she insisted, to what Hauschka replied: “I live everyday once. In a way, my music expresses a deep connection to life, and life is not only fantastic, fancy things, you know? It's also bringing my kids to the kindergarten, cleaning the house, going to a cafe; I'm doing everything intensely, and my music might be similar.”

With determination he abandons himself into the piano, you can identify it’s beat and relate to it from your own inner symphony, your heartbeat. The rhythm of his work for piano is similar to the rhythm of our own lives, of the sleepless cities and their involuntary dance: his music is filled with vitality: it stirs and sprouts, there is an urge for movement; and it is also very filmic; lots of filmmakers have been approaching him to collaborate, he has worked in four soundtracks this year alone, two documentaries, and two feature films, “Lion” and “Dubious Battle” among them. “For films you have to restrain the music, you have to make it soft” he explains, he’s fully satisfied with his cinematographic collaborations. He says the key to compose for a film is to explore, "I'm just losing control, which means I'm confident in knowing that whatever I play will lead me to a safe place. And it's like when you're in a new city and you want to go somewhere, maybe it's not the best advice to go to certain areas” he laughs gently, “let's just think it's all good.”

So, if you start by knowing where you want to be, then you’ll be able to discover and articulate what you need. 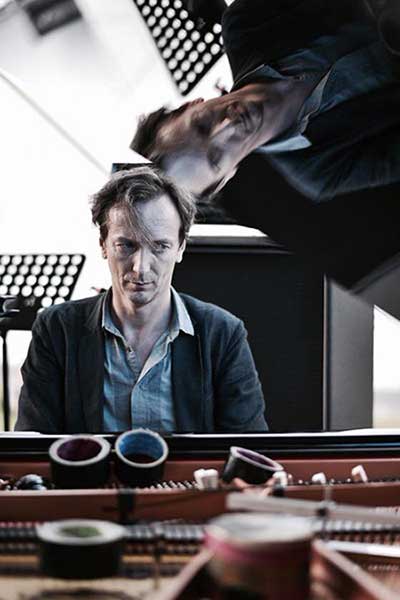 The landscape he identifies himself with is: "The forest filled with snow", he certainly took us there that night, the audience was captivated, a couple of kids were running around, laughing cheerfully, looking up with bright eyes, trying to find out how close they could get to the stage.

There was even a big party pulsing through the distance, “You have to live with the noises around you, and sometimes you can incorporate them to the music” he says. It would appear through his perspective that sculpting soundscapes is rather easy, but how does he incorporate the soundscapes around him to his very own music? "It's like you dive, slowly, and slowly, and always deeper into the sea; you discover things and you hold things: “this is great, I want to keep this...” And then you arrange it, and then you wipe everything away to start again. The soundscape that I'm creating is very much what I am at that time, and I think I couldn't do anything else on the piano at that moment when you hear me.” By this time Hauschka probably sculpts the sounds he wants out of the piano, he puts into words many of the things that can be done to enhance the sounds he’s looking for by experimenting with delays for example, and creating unexpected textures. He plays with all the different elements the piano provides. “(By then) I have already six or seven different elements that I can always change. Sometimes I build a carpet, I put sprinkles on it, suddenly I take something else; I slowly let it disappear... maybe something new is coming in; the music is shifting and I let it happen, and when it's happening, it leads me to somewhere else. If I can't find something, I stop and start from scratch.” Hauschka’s first urge to prepare a piano had to do with electronic music, he wanted to make electronic music with acoustic instruments and without a laptop, he was missing the drums, he most definitely achieved the sound he was looking for: “I was using christmas cake bags between the hammer and the strings, and I played with them, that was the first preparation."

The ArsFutura is a space for avant-garde music that defies the national and the international music-scene, let's hope this space keeps on growing, this edition was a dazzling gift.

Hauschka left the city the morning after the festival, his horizon has a lot going on: "Next thing is my new record, it’s not finished yet, I'm working with hip-hopers, so it will be partly hip-hop music, and I'm working on a new chamber-ensemble piece I've written; I will play cello concerto with a friend, that I wrote, and I have two films to finish, they all have piano in it and strings. I would say this films are of all different purposes, and I'm looking forward of one day doing a science fiction movie, I'd love that." There is also a nostalgic quality to his music, that urge of movement turns into an echo that revolves through weary spaces, oblivion has a different kind of imprint on forms and colors. Everything comes to an end. After elevating us and keeping us suspended in the cold, Hauschka takes his preparations and starts to scatter them about the stage; little by little that whimsical machine that was the intervened piano, starts falling apart beautifully, molding into that traditional sound we all know so well, and though the melody remains familiar, it has changed, just like memories change along the years; the audience lands on their feet softly to praise Hauschka and ask him to stay a little longer.

Pictures taken by Fernando Aceves for the ArsFutura.