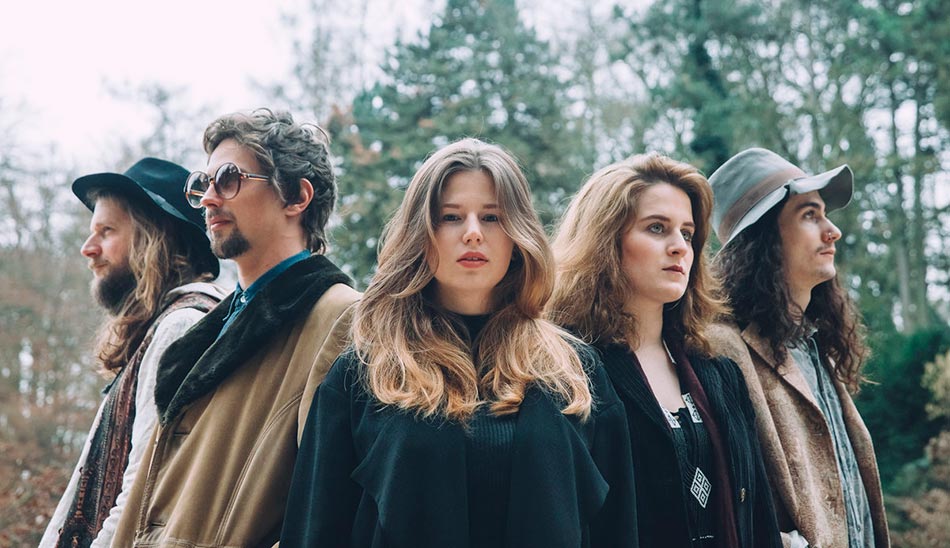 Down With the Gypsies has released their first album, Kassiopeia, and it has a delightful taste of restless nights, each song takes you to a different destination.

Their approach to psychedelia makes them timeless, colorful, as if they belonged to the 70s, but not quite; at times they go way back, articulating their roots into a delirious folk, a warm, oneiric tradition transmitted throughout timeless generations, that still beats in the core of a futuristic civilization, a fresh, chilly chant that moves along the wind in a tender flight… in a way, that thought might not be too far out, the band members happen to share different roots, pulses and influences from all over the world. Kassiopeia’s Intro lifts up mysteriously, along a provocative rattle; a defiant voice emerges to take hold from that moment on, Gaba Wierzbicka’s voice resembles the night, and as the night sings time loosens up, the night grows quiet and Sky Full of Cars begins, their influences: old school psychedelia and folklore, meld into a surrealistic portrait of daily routines, all so similar and different at the same time, it mirrors cotidianity with an acute dramatism, a soothing fierceness that you can easily relate to as it pushes you steadily into an iridescent interlude, a glistening dream that interrupts the flow of cotidianity; time bends and breaks, resembling the obtuse details of a distant memory that have gradually, and unconsciously, been left behind. Jamonem is one of the most beautiful tracks of the album, brisk and smooth, a refreshing puff, that flutters about playfully, just like a lively bird. The flute spatters all sorts of colors into this delicious pase that resembles a landscape as it changes along the highway, as it reacts to light, speed, to our thoughts and to how invigorating it is to be on the move. A delicate sway seduces you then, as Alejandro awakes with an alluring ardor, a mesmerizing blaze that persuades you to dance the night away.

- What’s the story behind Down with the Gypsies? You have a very particular sound, how did you find it, how did you worked with it?

Tom (Schneckenhaus): Back in 2015 I met Gaba (Wierzbicka) for the first time. She and Grzegorz, our first guitar player and founding member, had their rehearsal room next to the one of my old band ASTROKRAUT. After a few jam sessions I asked Gaba, if she’d like to try singing, besides playing guitar and keys – and was overwhelmed. Never heard a voice like that before!
So we decided to start a band inspired by long nights of jamming or just listening to music, and most of all by Jimi Hendrix & the Band of Gypsys, that’s one of the influences behind our name.

A few months later I was at a concert where I met Phil (Reiter). He told me that he played the flute and that he was very interested in music. I invited him to our rehearsal room and yeah, he became a member of the Gypsies too.

In our short history so far, we’ve had some changes in the lineup. In the middle of 2016 Grzegorz quit and Melina (Tzimou Weiz) took over the guitar, then in the end of that same year Mitja (Besen) became our new bass player.

Our sound relies on the different cultural and musical background each member has. Most of us have been in other bands before that played quite different genres. Now we’re just trying to mix up everything we love.

Also, some of our roots come from countries all around the world. Gaba herself is from Poland and has lived in Germany for a couple of years now. One part of Melina’s family is Greek, Mitja is a bit Brazilian. And right now, we’re living in different countries. We’re an international band that happened to be founded in Germany. We see ourselves as “Gypsies”, because we love to travel together, go on tour and maybe settle down somewhere, but not forever, you know?

That’s where our name comes from. And we are down with it. I hope you’re too! 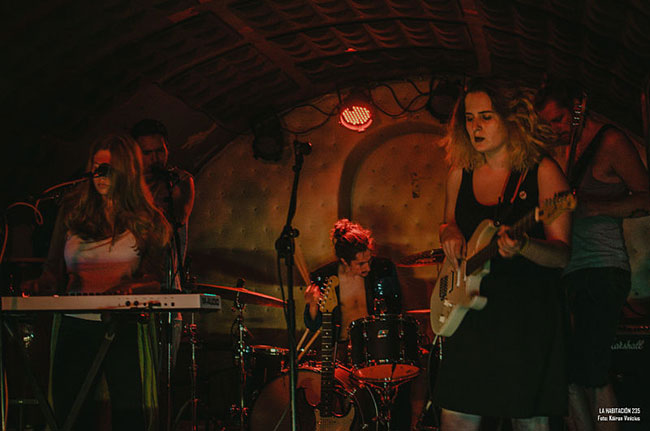 - What is it about Icarus’s myth that fascinates you? How did it inspire you to write this song?

Tom: Actually the song has nothing to do with the myth of Icarus. Of course, it’s an interesting story, fascinating like all old Greek and Roman myths, but the name “Icarus” was just a sudden idea while writing the song.

- What was the process behind Kassiopeia? Many of the songs are named after someone, a person, a figure, is there a concept behind it?

Melina: In my opinion there is no official concept behind this album, it started to evolve by itself and found a round ending. We were not trying to find a reason in the whole thing. Each of the songs might have their own meaning but it’s just a big conclusion of what was going on in our minds, a mixture, a creation of all of us.

- What’s the story behind “Sky Full of Cars”? Right at the middle it drifts into what would seem a futuristic soundscape of a highway, tell us a bit more about that sudden, yet gorgeous twist.

Melina: Personally, I like this thought: the soundscape of a futuristic highway... sounds good. We were trying to convert sounds of cars driving in the streets into a cloud of psychedelic atmosphere. That means an abstract version of the daily sounds you hear. The twist in it is just another experiment we did and it worked pretty well to the first part of the song and its lyrics.

Tom: As Melina said, the sounds of cars driving by just worked with the lyrics. We tried to create a psychedelic, dreamy interlude between this song and the following “Icarus”, a soundscape that leads something uncomfortable into something comfortable. Some people fall asleep through white noise, for example a hairdryer. The sounds of a highway can have the same effect. So we turned the street full of cars into a “Sky full of Cars”.

- From what surrounds you, it could be landscapes, literature, you name it, what inspires you the most?

Melina:  Each of us has his or her very own inspiration. I cannot really explain what inspires me the most, inspiration just appears. I cannot remember if there is any literature or special landscapes that used to inspire me. It’s just a mixed chaos of everything.

- It’s a thrill to listen to “Jamonem”, could you tell us more about it?

Melina: I think while you listen to the song you start to remember somebody special and you can think of your very own story while listening to it… 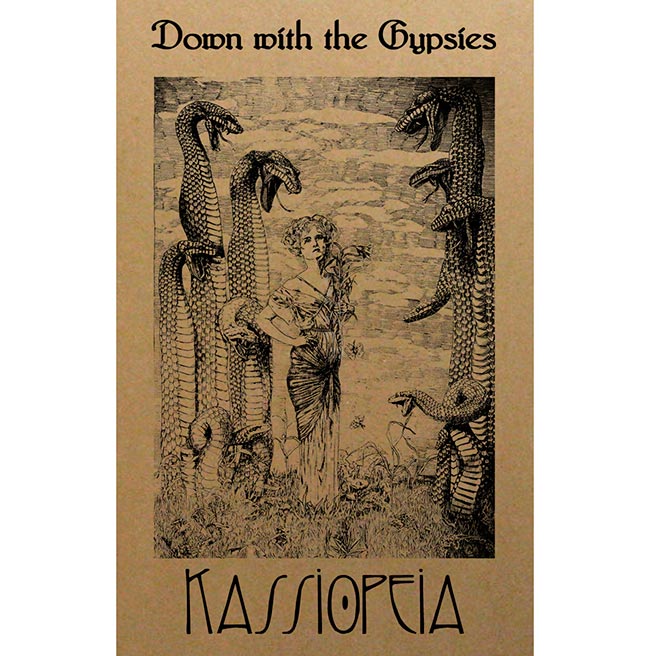 - There is a folkloric taste to your music, how has the music around you inspired your work?

Melina:  I would say, Folk is a very important part in our music. The folkloric taste comes definitely from our different roots and the music we grew up to. In the future we want to try to use more different instruments from other cultures we feel connected to – or cultures we are already connected to.

- On that note, would you tell us a bit more about “Alejandro”?

Melina: Alejandro was a dangerous man.

Tom: In the whole making of “Kassiopeia”, this song was the last one we wrote. It happened spontaneously in the studio while recording the other songs. First I didn’t like it, but it turned out to be something really smooth. As I remember, the lyrics were written quite in the end of the whole studio session, which took 5 days by the way, we all were kind of dipsy, ‘cause we had a few drinks. We listened to the record and said: “Oh, this one sounds like a good movie soundtrack. Maybe for a Tarantino western movie?” So we came up with the idea of a villain called Alejandro.

- Could you tell us more about its beautiful artwork?

Melina: The artwork is a drawing from an artist friend of us who did an exhibition about gypsies in early 2017. The woman on the drawing reminded us of Kassiopeia. The symbolism of the snakes in a flower garden with that beautiful, strong woman just matched, even if we had only named our album after the star sign, Kassiopeia, and not because of its mythological background. This star sign includes five stars, which represent the band members.

Tom: On this album we worked together with awesome artists. Hel Cadura made the drawing, Lewin Graf designed our Logo, that looks like a campfire and Milena Zivi took some great photos of us back in the days when we were recording in Linz, Austria.
In the end I took over the job to put together the layout design. I wanted to create something mystical, something that suits our name and our music.

I looked for the right fonts and background color, which was actually a really hard decision, because each of us wanted something different.

In February 2018 we’re going to re-issue it in a new outfit on vinyl on our new label StoneFree Records. 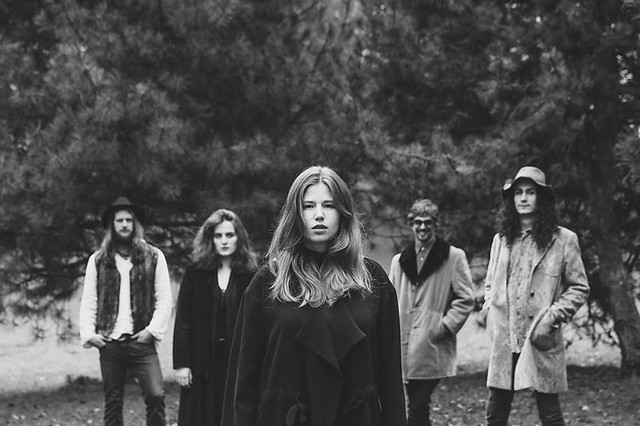 - There is an oneiric quality to your music, to the turns it takes, to its textures, does your music relate to dreams?

Melina: I don’t know about the others but my guitar riffs and parts remind me a lot of things I dreamed of.

Tom: As I said about “Sky full of Cars”, our music IS related to dreams. Kassiopeia has a lot of mellow, relaxing and atmospheric parts and yeah, maybe someone might fall asleep, but I hope, it’s not because of boredom…

- Your debut album has been very well received, how do you feel about that? Where would you like to take this album?

Melina: Yeah, and we are very glad and happy about it. I think we would like to take our music all over the world... as far as possible and maybe put it in a spaceship to show it to some aliens. Let’s see.

Tom: I definitely want to win all music awards and Gold

Just kidding, it feels pretty good! I’m curious where it will take us next year and I hope we will get the chance to play at great festivals and concerts.

But ok, we got the first LP out and played a handful of shows, let’s see what happens when baby number two is born.

- You’ve been touring with Kassiopeia these past months, how has it been, taking your music on the road? Any anecdotes you’d like to share?

Melina: The tour was awesome. It was a blast to see so many people smiling and cheering at our gigs. We are grateful that they’ve been there and listened. Any anecdotes? Well, we wrote a poem... the story behind it is gonna’ appear in our next album... get ready!

Tom: It was our first tour with our first LP and it was a great experience. I’m very excited for the next one, which will take place in summer 2018.

It’s magnificent to meet a lot of different, extremely nice people and see places I’ve never been to before.

But touring is not always fun. After spending five days together in a small bus, the other guys can be a real pain in the ass to me. Sometimes… Like a family, you know? Haha! But most of the time we had a lot of fun together! Except when you have to drive 1600 km and the bus driver suddenly decides to drive at 80 km/h only. It took us over 30 hours to get from Hengelo to Barcelona. But, after this f*ckin’ long way, nobody left the band, so I guess we get along pretty well.