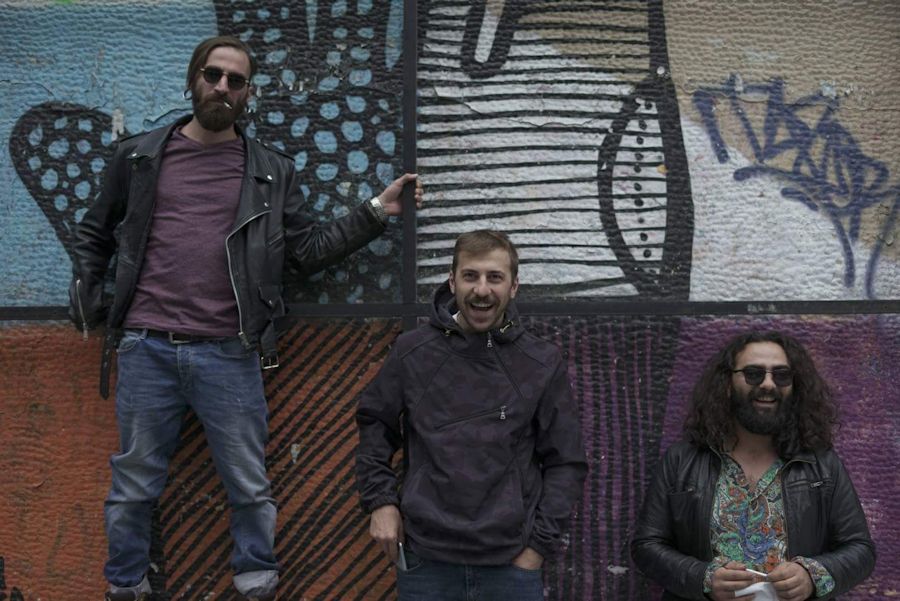 Mind Me When I’m Gone roars in a delightful kind of way and sets the tone for what will be an explosive album. This rock’n’roll trio is loud, concise and all over the place: Supersoul’s debut comes all the way from Athens, and that is no surprise, the stoner scene from Greece is flourishing rapidly.

It’s a thrill to imagine its nightlife, the steam, the sweat and the crude guitars that shudder alongside smooth yet contagious vocals… Gold, the second track of the album is a fine piece that will definitely take you there. A taste of blues and a bone-dry soundscape, that could easily resemble a deserted highway, hasten from Crave My Stone into Blackhorse (which has a brand new music video you must check out), on a ride that’s anything but steady; and just when you think you know where the album is headed, Divine comes along to melt you down with a raw kind of sweetness, definitely one of the best moments of the album, it’s plain easy to listen to Divine compulsively, again, and again, an impish kind of tenderness to it that I highly recommend. There is something sexy and effective to their songwriting too, this album is as elegant as it is rough; the heavy riffs on the Wrong Side of Suicide and Came Back to Moscow fall just in place, there's a soothing kind of violence that plays about with contrast, their melancholy feels just as good. It would seem that by the 13th track the album would be almost over, but not quite, this will be an ending of epic proportions: Faith Bender, the song that gives its name to the album, blows the speakers up, it’s rather easy to get addicted to this one just as well and sing along to: “This is so called social justice". This rush of coarse adrenaline  fades beautifully into The Torment; Freedom Prayer seems to be a continuation of this last one, it awakes solemnly to give closure; their lucid lyrics and the way they articulate their political and social views throughout the album is as graceful as it is powerful, these last two tracks are not an exception, the words are as honest as the melodies and that might be the reason why it’s so easy to be captivated by them. 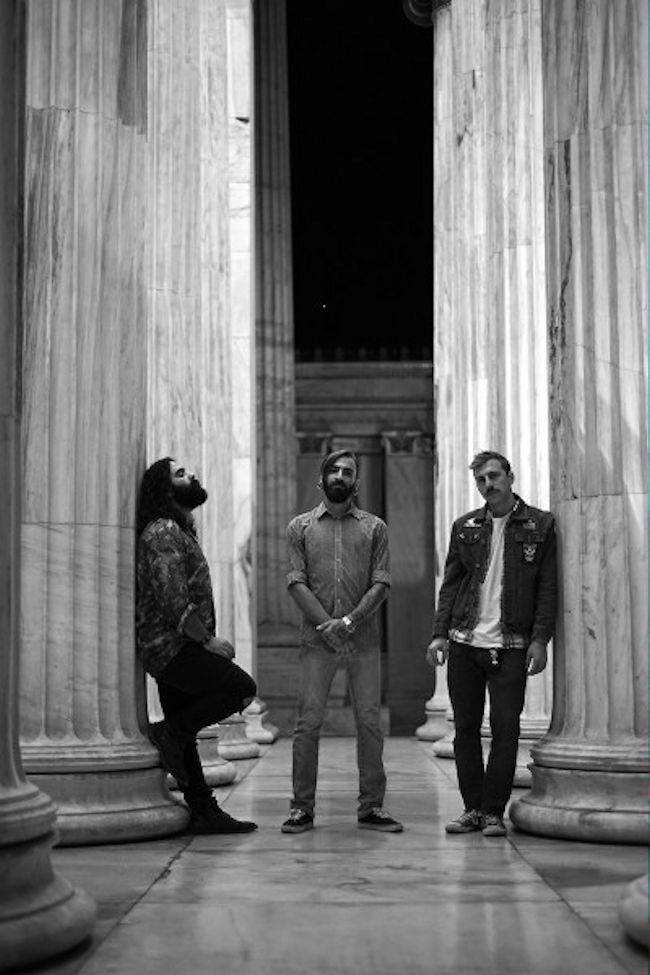 -You’re all over the place! How did all this begin?

All three of us grew up in Athens. Rami & Rusty played acoustic blues for some time and had begun writing a few songs. It was when Evan appeared that the trio was firmly formed and went electric. We played a show downtown with 6-7 early forms of Faith Bender's songs. A sweaty, underground show that was! Not long after that, we decided to work on a full-length album. We produced and recorded the album and straight after its digital release we toured Europe under the name "Blues Royalle Tour", organized by 'A Map Constellation'. And we've been extensively playing ever since.

-Your album is a solid piece of work, could you tell us a bit about your influences, from music to your surroundings, this album seems to have come out of the blue!

We pretty much reflect what any rock'n'roll band of our time does. We love rock'n'roll, we dance our nights out, we listen to blues, rock of most decades, as well as 90's rap music. We naturally blended all that with our own aesthetic filter and ear perception and talked about things that consume a big part of our thoughts. As Nina Simone would say, you can't be an artist and not reflect the current situation in this world.

-Would you tell us the story behind Carve My Stone?

It is a song that portrays the guilt of enjoying the dark side of life. Therefore the field/gospel touch. It symbolizes the whole relapse process through what religion considers as sins and fearful encounters. And it essentially acts as a prelude to Blackhorse -our salvation talkin' track.

-The music scene in Greece is on fire! How would you describe the audience?

Well, it takes two to tango. Bands wouldn't thrive without the audience's thirst and at the same time there is a good number of bands that nourish the need quite well. We are happy with the fact that we're based in Athens, both as a band and as listeners. Just by the fact that a huge local gig would take place a couple of train stops away, makes this small country artistically vivid.

-Divine is probably one of my favorite songs from the album, got me from the start, could you tell me more about it?

Our album challenges three concepts: Sex, Money & Power. Whether being ironic on a concept or praising it, we pretty much do not step out of context. 'Divine' is a tribute to love and pays homage to sexuality and attraction. 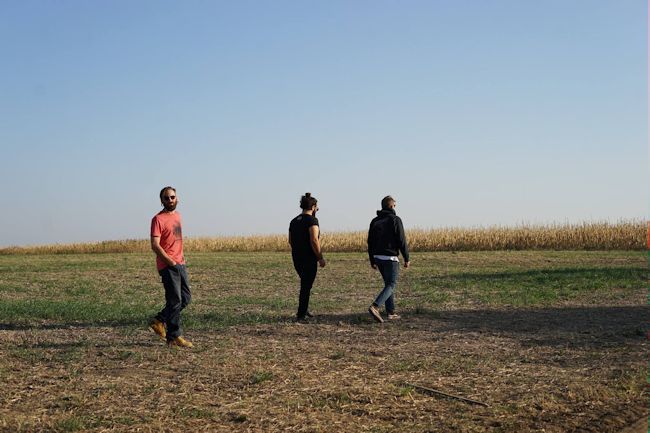 -Tell us about shooting the video of your first single, The Manipulator.

Our very own Evan wrote and directed it and we believe in what he does both on drums and camera. We shot it a few days before our tour began and released it from a cafe while on tour. As you can probably tell, we are fond of great vehicles.

-Are these lyrics from The Manipulator referring to Greece’s current political situation?

”Ninety-nine Gods with a cross to go,

but you made your way down to Mexico.

Call it love, but it’s a cold war,

Between the homeless and The Governor.”

The song narrates a sick and unequal relationship in which one is imposing and the other is obeying. Again the album is constantly using three tools, and in The Manipulator, we are emphasizing on sex and power. Comparing powers of a governor and a homeless on the second verse portrays the inability of the obedient to see clearly due to the fact that they are looking at the governor while kneeling, as Che Guevara had expressed. Needless to say, these expression tools do reflect both countries' political state.

We truly believe that music is one of the strongest forms of artistic expression. When writing, the freedom of expression is abundant. An inspiration is a glimpse of a route that a song is directed to, and it makes a perfect chance of saying things you wouldn't say out loud on a daily basis. Woody Guthrie wrote:  "This Machine Kills Fascists" on his acoustic guitar at a time of extreme political wing polarization. And in a way, it did. Music is an extremely strong expression tool and it can be used to challenge anything.

-There is a tasty rush to you narratives throughout the album, how do you relate to adrenaline, would you consider adrenaline as a source of inspiration?

Inspiration and adrenaline are instantly and mutually related to each other. When we wrote and recorded songs there was a momentum in it, and we kept it going until the very last day. And god, we love to recall this rush on every show we have.

-Tell us a bit more about the track that names the album, Faith Bender, why did you choose to name your album after this one?

Some things just come out in a compulsive way. We can't precisely put down why or how this happened, but when we wrote the song we kinda agreed on the go, without saying much or overthinking it. The song covers part of what we express on the record, but the title covers it all.

-Is there a story behind your cover? It’s rather fancy.

We wanted to use a photograph that covers most of what we talk about, and when we saw this picture we all agreed on it. But we know as much as you do about it.

-The Torment and Freedom Prayer get along so well, it is almost impossible for me to hear one without the other, are they related somehow?

When we were recording Freedom Prayer, we instantly knew it was the right end for this record. These two songs are conceptually related and The Torment was put before Freedom Prayer on purpose, adding a liberation message that it takes hardship to be free.

-What made you pursue your career in music? Giving life to a solid album is never easy, where would you like to take it now that it’s out there?

We always deeply believed in music, both as individuals and as a unit. We love listening as much as playing and we are lucky enough to be able to sculpture a record that is still a fun record to play and tour with. As regards to recording our debut album itself, it wasn't an easy task to do, to be honest. It took time, effort, deep focus and even sleepless nights, but we always enjoy playing it eventually. However, as with most of things in life, there is always space for more & better stuff. Our album Faith Bender is only the beginning. We are happy it took off instantly, but we are looking forward to the next steps.

Get carried away with Faith Bender, you won’t regret it: