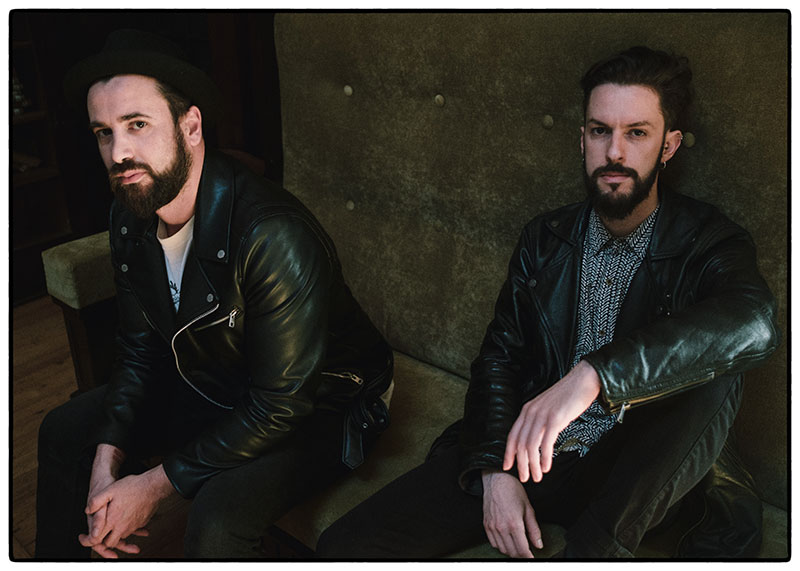 Care for speed? Get in, you’re in for a ride. Rough, fuming, and seductive, Her Name Was Fire will drag you in pursuit of Fire, a mistress whose story remains a mystery...

Their stoner-rock groove along their raw vocals are quite effective, they ignite everything they touch, a hue of Queens of the Stone Age and Alice in Chains filters around them like hot steam.

Gone in a Haze is their first single, and it grabs you softly with its desertic touch; rusty air, a familiar road, it seems like they’re slowing down their pace until they hit the accelerator to full speed with a chorus that sticks in your head with its persuasive roar. The song revolves on the process of letting go, the video plays with how obsessive the mind becomes, hauling you through deceptive turns, as they leave us a hint of Fire’s identity. To let go is to break free. Wrong explodes right after, my! These guys are intense. They know exactly where they want to take us and how to get us there at an infectious pace; suddenly, it starts to feel like a competition, so we anticipate where they’re taking us, because we want to get there first. Bring the Ransome is fueled by this constant battle in between tension and melancholy, I would say melancholy ends up winning this round. Summer Strummer rages on, drifting with a volcanic fever into the sunset, flirting with the intermittent contrast of the silhouettes the sun casts over the ground and the violence of this febrile light that takes over the landscape; distorted stripes chase each other, carried away by the rush, until they melt into a dim light, that’s when To the Sunset gently begins, colors appear so clear you can almost grasp them, it’s a beautiful surrender, and a tender new beginning.

-What’s the story behind “Her Name Was Fire”?

I (João Campos) had played with Tiago (Lopes) in another band called Rejects United for a while until it disbanded, 4 or 5 years ago, and we kept in touch since then.

After a few other projects I was trying to come up with something fresh and, why not try to do it as a duo? We both had bands with 4, 5, 6 members so, could I make it work? Just me and a drummer? This was the challenge we were up against and I think we pulled it off well enough, if I may say so.

The name itself has it's own fictional background story that we are going to reveal through our videos… so, I guess for now, let's just say Fire is a mysterious "femme fatale" that is common to both of us.

-Can you tell us the journey of bringing “Road Antics” to life?

From the first time we jammed, the chemistry was instant, I can honestly say that the idea behind 3 or 4 songs, that we are playing now and that we recorded on the Ep and on Road Antics, came from our first rehearsal.

When we recorded the Ep we already had half of the songs that would be on Road Antics. After the Ep we kept on doing new songs and recording new riffs until we had around 15 songs. We just sat down and listened to all the material we had and chose the ones that fit better together, that had the vibe we were looking for.

We realized the songs we chose had a gritty, dusty, sleazy kind of vibe that was perfect for a road trip through the desert and dive bars. We threw around some names that would invoke that feeling and Road Antics just stuck above all others because it had all the elements we were trying to pass through our music. It has asphalt and the unpredictability of all the crazy things that could happen while you are on the road. 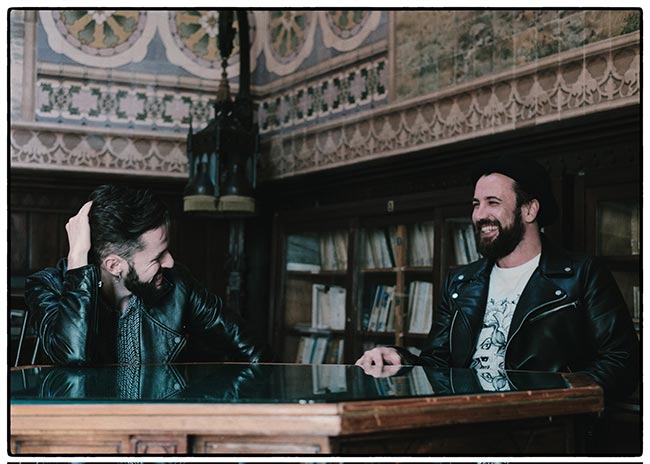 -Tell us more about your first single, “Gone in a Haze” and it’s music video.

I think Gone in a Haze is the perfect example of what we are trying to do musically, the song is catchy and sexy and it has it's rock edge still. Lyrically it's about letting go of someone that hasn't been around emotionally for a long time and coming to the realization that sometimes that it's all you can do… let go. The video presents Tiago’s character running away from his demons and his memories of Fire. We tried to set the tone visually with the video of what we are doing with our music, this vibe will continue in the second one, since we are trying to tell the story of how both of our characters meet and what is it that connects us.

-How did you develop your sound?

We wanted to play groovy riffs and have sexy, dark songs, that was what we were aiming at. So with that in mind and taking in consideration the limitations of being a duo, we developed our songs to be dynamic, catchy and with a feeling of danger.

-What influences you? (from music, to literature, a place, anything you want)

Well, all kinds of things. Music, obviously, from Queens of the Stone Age to Zappa. We are big movie buffs (our song nightcrawler is an example of that, it was influenced by the movie) and visuals definitely have a big impact on what we do, from illustration to comics, to paintings, you name it.

-How would you describe your live presentations?

We put all our energy when we are on stage, so I think it’s fair to say they are energetic. People are taken by surprise when two guys are able to sound so big and loud, that's one of our trademarks, we don't sound like a duo.

With that said, some people have commented that they see the deep connection we share while we are playing, and I can understand why they say it. We have been friends for a while, even before Her Name was Fire started, but this band brought us even closer together. 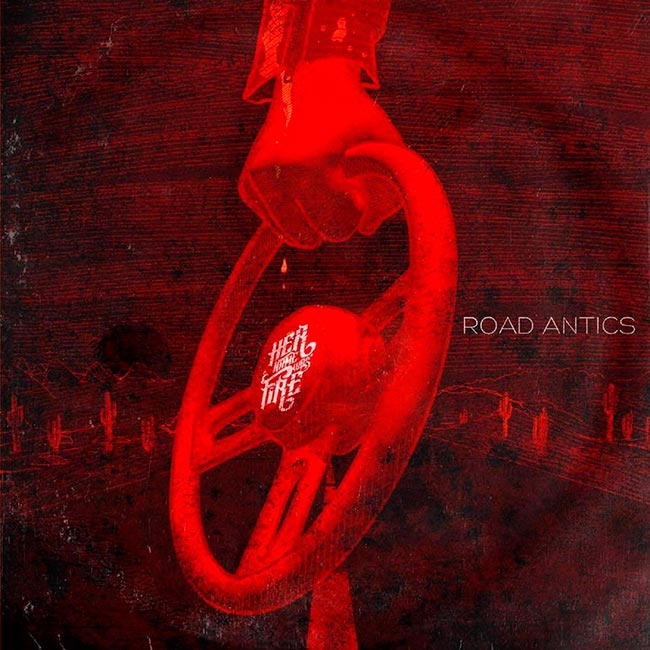 -Please tell us more about Wrong, probably one of my favorite moments of the album!

Wrong is a song about a Sunday hungover, where all the doom and gloom settles in after a night of partying, and you question if it was worth it. It's also one of my favourite songs from the album because of the voice harmonies.

-What is happening now with Portugal’s Music Scene?

Portugal's Music scene is alive and well, with a lot of good bands and interesting projects from all types of genres. Some people have said this is the new golden age of Portuguese music and I totally agree with that, a lot of good music is being made in this sunny corner of Europe.

-Tell us more about “Bring the Ransom”

It's a groovy mid tempo song that just works on tension, it doesn't really explode. We were aiming for a haunted vibe with the voice melodies and I think we accomplished that effect. Lyrically it's about going through the city in chaos, searching for your own destruction.

-You’ve released a great album, what are your plans? Where are you planning to go with it?

Thanks for the compliment, we worked hard to make an album we would be proud of. We hope it gets to as many people possible. Our main goal is to make Her Name was Fire an international band, we love playing in Portugal, but we are working on playing in the rest of Europe and, who knows? The rest of the world, that's what we are aiming at.

-Could you tell us a bit more about “Summer Strummer”?

It's probably one of our fastest songs on the album and the last to be finished for the record. It has kind of a punkish vibe in a way and it's about the need to be always on the move, to feel alive...that a lot of vitamin D, lack of sun can mess you up, I know that for a fact.

-I see there’s a steering wheel on your cover, where do you want to take us?

To dangerous dusty roads filled with rock'n'roll, weird stories and even weirder characters. 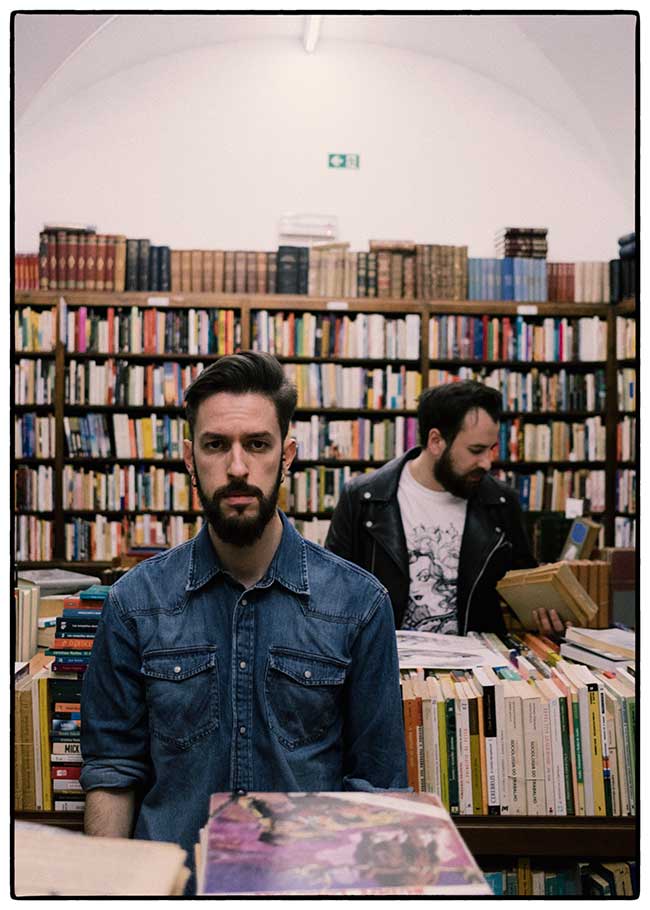 -This record is a thrill to drive to, at full speed too. Which would be your ideal soundtrack for a long trip on the highway?

Well that's a tough question, I think it depends on the weather, the mood, etc… right now, from the top of my head, I would say a mix between some stoner psychedelic rock, like All Them Witches or Causa Sui and some old soul, like Curtis Mayfield. But who knows? If you ask me that question next week it might be Mastodon and Kendrick Lamar, it all depends on the mood.

-Now that we’re talking about long rides, please tell us more about “To the Sunset”

This track was inspired by the visuals of western movies: dust, desert and a lonely "hero" moving towards the sunset. Musically it has a more old school rock approach.

-Where do you see yourselves in a couple of years? Where do you want your music to take you?

Well, we hope we will still be doing what we love, making new exciting music and

playing all around the world, we just hope this band continues to grow and appeal to more and more people.

We would like to thank you for the interest in our band and I sincerely hope this interview makes someone curious enough to go listen to Road Antics on Spotify, iTunes or just check our Facebook page. Keep it rocking! 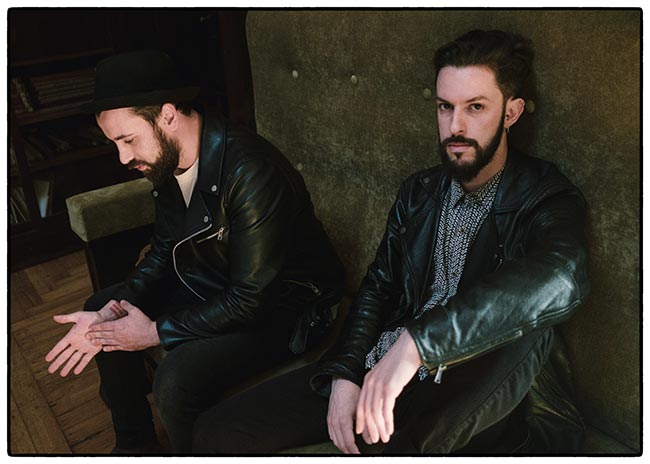 Wanna catch some fire? Hop in!