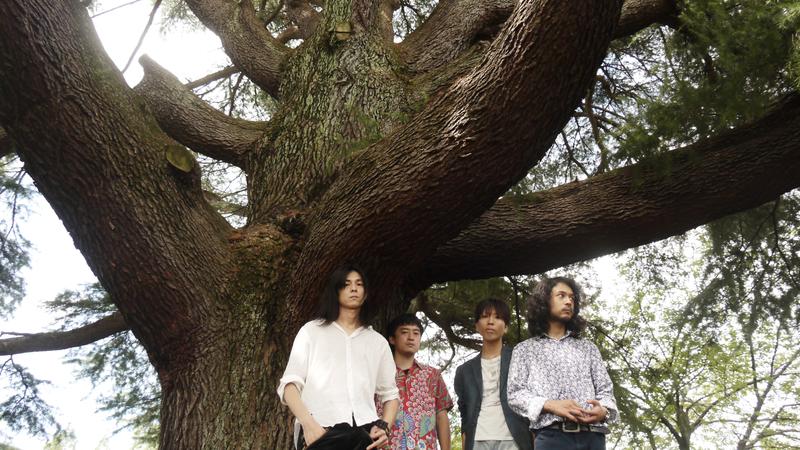 This February had the latest release of Sundays & Cybele for our ears: “Chaos and Systems”, a kaleidoscopic display of vivid colors and textures that will surround you in a draught.

Sundays & Cybele is a psych-rock band from Japan that’s been active since 2004, with a krautrock and a progressive taste to their groove,  transformation is the only constant throughout their career. “Chaos & Systems” starts with a frisky rattle that blooms about, spreading and exploring color as it gains speed. Is that how a traditional folk-song from a distant future would sound like? As it continues to gain speed, it seems like it takes off after an elaborate awakening, “Butterfly’s Dream” tinkles right after as it soars at full speed with delightful swirls, when it reaches it’s highest peak, it slows down beautifully, movement stays latent though, as an impulse to dance takes hold. The warmth of “Tell Me The Name Of That Flower”  takes over with hazy buds that exhale a familiar texture; a beautiful quality of Sundays & Cybele is that they could perfectly blend into the 70’s soundscape, yet, at the same time, they sound so fresh and new. “Paradise Come” thrives along this zestful journey, the last piece of the album, an outstanding one too. It takes a deep breath to release beams of soft light that gently interweave with each other. As texture continues to evolve throughout the album, it would seem like it’s telling a story. From the first track that has a mechanical spark to it, to the middle tracks that have a more earthly taste: the resolute growth of the seeds as they sprout, the ceaseless cycle of the flowers, until it ends, and everything is transformed into light.

Kazuo Tsubouchi, the man behind Systems & Cybele, talked with us about this brand new album and what is to come:

I especially like thinking and talking with my friends, they are my greatest inspiration.

It's hard to talk about only one soundscape, but if pressed, I’d say a soundscape that people can interpret as they like.

When it comes to landscapes, it's a little different. My hometown is very small and covered with snow one third of the year.

The British photographer, Michael Kenna, published the photography book: “Hokkaido”, it completely matches the landscape of my heart.

-Could you tell us more about “Waiting for You”?

When I wrote this song I was inspired by a buddha called Miroku Bosatsu. People from long time ago believed that 5600 million years later, Miroku would appear to save them...

I thought about waiting an enormous amount of time, this wait may ultimately be of loneliness and hope.

-It seems like your sound has traveled a long way from “Gypsy House” to “Chaos and Systems”, it has evolved in shape and form, could you describe for us how has your sound evolved along the years from when you first started out?

When I recorded “Gypsy House”, in the summer of 2012, many musical ideas were in my mind. After all, I recorded a two-hour album with two guys. “Butterfly's Dream” was composed during this recording session.

Our 4th album, “Tsubouchi”, was my personal trial on composing and writing lyrics, and then our 5th, “Heaven”, was another trial, we simply recorded our music as if we were playing on stage.

-Please tell us a little about “Tsubouchi”, particularly about “Sleeping Days” and “肉色の計算用紙 (55 ghost)”

Both songs are expressing the situation of Japanese people after the 11th of March 2011- the earthquake and the severe accident of nuclear plants.

At that time, everyone was afraid and confused.

After a while, I realized that quite a lot of people were seeing only the things they wanted to see as an escape from their uneasiness. It’s called post-truth now.

-The way you play with textures and colors is entrancing, could you tell us about how do you relate to texture?

Actually I often can image sounds visually, it is called Synesthesia.

Also, when I was around 20 years old, I committed myself to some kind of electronic, experimental, ambient, minimalistic music, and that gave me a hint of how to relate to texture.

-How has the Music Scene in Japan changed over the years? What is happening now? What new artists would you recommend?

I only know . During this past two years, we got along with several psychedelic bands that belong to Guruguru Brain’s label.

We are sharing information about music and sometimes we listen to each other's demo, it is very exciting.

My recommendations are Minami Deutsch, Dhidalah, and of course Kikagaku Moyo.

-”Chaos and Systems” marked a different and delirious turn in your sound, could you tell us more about how this album came to be?

This album is an aggregate of many fragments of Japanese Pop Culture, Asian and Japanese thought, and my musical career.

I tried to integrate them with many kinds of techniques. I recorded all the sounds as they occurred to me and then I edited them to have consistency, it’s like giving the systems to chaos.

-A trademark of your sound is how you keep on reinventing yourselves. How do you relate to change?

It is important to remain curious about everything, this is my strong point. I actually don’t have that amount of skills on instruments, but I like to think of new methods to play these instruments. I don’t like doing it the same way.

-I hear some delightful Kalimbas on “Chaos and Systems”, could you tell us more about that song?

This song was made when I was toying around with a kalimba. I often play kalimba to relax. It was inspired by gamelan, but all the sounds were played on only one kalimba.

As for the lyrics, it is like the rice-planter's song. Ancient people planted rice while singing. It's a prayer for fertility and Cybele is the goddess of fertility and destruction.

-Please tell us more about “Paradise Come”, what a vivid piece!

This song is the development of “Paradise Lost” a song from the album ‘Tsubouchi’. The characteristic of this song is the vocalization. With some delays on the voice of an old Japanese singer on purpose. It’s not just fit to tempo, but I realized it was comfortable and tried to do it myself. I sang the song of “Chaos & Systems”  again because I thought it’d be better if the first song and last one were similar for symmetry.

-On that note, where are you planning to take your brand new album? What does the future hold for Sundays & Cybele?

I wrote nine new songs, these are related before and after. A few of them were played recently on our Asian tour.

Later this year, we are planning to go to EU and the UK on tour again. I hope to complete the recording of our new songs before that tour, also I’m planning another slightly experimental recording, like control noises.